Skip to content
It’s almost perfect. Another Friday night in beautiful Victoria. I’m watching the sunset over the inner harbour, listening to people having fun underneath my window as they go to and fro.
After work, I headed off to the Bengal Lounge in the beautiful Empress Hotel. I started with a Lighthouse Race Rocks:

I have always been quite proud of myself that I can sit in a lounge by myself and enjoy a drink, but today it would have been nice to have a friend with me to recap the week. Instead, I busied myself with taking pictures of my beverages and food, taking notes, and calling home to Edmonton.

I wasn’t in the mood for a proper meal, so decided to pick away at the appetizer menu. I started with vegetable samosas and onion fritters. When they arrived I thought they looked a bit over done, but holy moly where they good! It was served with mango chutney and cumin and ginger yogurt. I’ve never been much of a fan of cilantro, but this dish had bits of it, and I’m now a convert.

Next up were cashew crusted dungeness crab cakes, garnished with cucumber sunomona and kimchi. Now, if you shop at the Farmer’s Market in Old Strathcona, you know the Korean guy that sells kimchi. I’ve always by-passed this vegetable thing in favour of his deep fried whatchamacallits instead, which are yum-ola. After tonight, I might be buying the kimchi. I had no idea what I was missing. Spicy. Delicious. 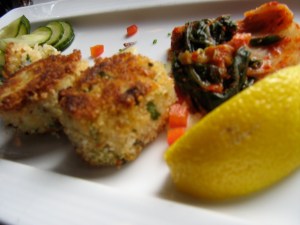 Then, just because I wanted to celebrate having had the opportunity to be out here in Victoria for work, I decided to imbibe in two cocktails for dessert. The first was something called the Bengal Indulgence which was created by the Thirsty Traveler, Kevin Brauch. 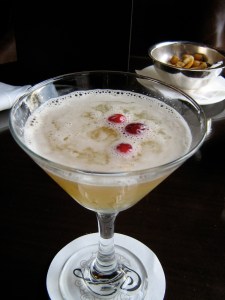 It’s a mix of ice wine, vodka, Contreau, tea, lemon and orange bitters. And that’s what it was. Bitter. So John-my-waiter, who now places in the top 20 of my friends, suggested I try the Empress 1908-10. If you know me, it doesn’t take much to twist my arm for another drink… so I did.

What a drink!!! It’s tea infused vodka (remember, Victoria is about tea) fresh lemon juice, frothy egg whites, sugared rim, and that itty bitty thing on the plate is a mini scone. It was refreshing, delicious, and a bit too smooth. A proper lady would sip it, but I drank it pretty much like a shot. If I had a tongue like Gene Simmons, I would have polished that glass off like it was never used, but alas, the frothy egg whites were mostly left behind.
Now, after eating nearly a weeks worth of chocolates that were left on my bedside with the turn-down service, I am ready to soak in the tub, write a few e-mails, then retire to my gigantic king-sized bed, stack pillows around me like a fort, and be entertained with whatever my brain decides to pull off the DVD shelf of my mind and present to me in a dream.