Michael works near a little shop called Argyll Foods at 9984 63 Ave NW in Edmonton. It has been your usual little corner shop until recently. In December, it was purchased by Carlos and Bernardo, who are from Mexico.

Michael had brought us home a strange sweet called a Pulparindo from this store. It’s not like anything I’ve had. The base is tamarind. It’s chewy. It’s starts off salty. You chew into sweet, and finish off with a kick of heat.

Having never been to Mexico, or exposed to anything genuinely Latino (a visit to Tijuana, an Old El Paso Taco kit, and shots of tequila don’t count), I was interested in what else they had in this store.  I asked Michael to describe the stuff they had, and Michael replied, as most men will, with descriptions like “those flat bread things”, and “pop” and “flour” and “that candy”. I tried to interview Michael further, but decided the best thing to do was get in the car and go for a visit.

When I arrived, Bernardo was outside scraping the ice and snow off the front walk. We introduced ourselves, and I was happily taken into the store for a tour. My first observation was that it was the cleanest corner shop I have ever been in. The stuff on the shelves were lined up neatly and the floor spotless considering the muck outside. 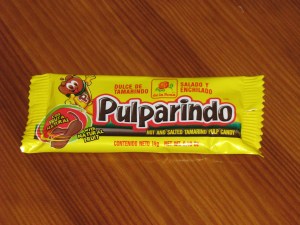 We had a nice visit Bernardo and I. He was generous with his time, and patient with my questions. Bernardo is from Mexico City. He was a flight attendant with Aero Mexico for 16 years, and I deduce that is where he learned his excellent customer service skills and developed his charm. Bernardo spent time pointing out the different salsas, beans, sugar, chilis (both dried and canned), tamales, corn masa mix, drinking chocolate, candies, tostados, fruit concentrates to dilute in jugs of fresh water, and cheese. This is the just the beginning, soon he and Carlos will be bringing in many other Mexican products, including magazines and, what I can’t wait for, is coffee!

There were a few items that grabbed my attention, but mostly a brown cane sugar. I inquired how it would be used, and Bernardo explained one way is to break off a piece of the sugar and put it in your coffee with a cinnamon stick. My photo of it didn’t turn out, so you will have visualize it. Think of a hockey puck in a rich caramel brown. The drinking chocolate, which Bernardo explains smells of Mexico to him, smells heavenly. Through the box, you get a delicious chocolate aroma and the hint of cinnamon and cloves. I couldn’t resist it, and had to buy it. In fact, I took home two bags worth of stuff to try. You can see my haul in the picture. Now, the challenge is to put this together into something that resembles supper, and hopefully in the shape and taste of something a Mexican would recognize. We already tried the tin of guanabana nector with a splash of rum. It was devine.