At the encouragement of our dear neighbours, Michael and I tried Maki Maki last night. Maki Maki is a Japanese slash Vietnamese Restaurant located in Old Strathcona, on 101 St and 81 Ave…. that’s right, where the Old Mill used to be.

The place is bright, the Christmas decorations interesting, and our welcoming and pretty servers wore lovely little kimono-type dresses, which, if I had to wear, would bust out of like the Hulk out of his jeans, and would roar for women’s justice and freedom. Still, they are pretty, and if I were a size -1, I would wear a kimono to work too.

The menu is about 2,421 pages long. 80% of it Japanese food, 15% Vietnamese, 5% Western. The draw to Maki Maki this evening wasn’t necessarily the food. Our neighbour mentioned they fill their wine glasses “to the top”, and because right now I’m having problems with someone at work, namely me, I felt I needed a glass of wine last night to sooth my agitation. It was an easy sell to Michael, because when he got home, dressed up in his bike-commuting wear (reflective safey bib, touque, bike helmet, right pant leg tucked in his tube sock), he looked like he just finished slaying a stubborn dragon, and had too long a chat with an old boring wizard. The poor man was weary, but still agreed to head out for dinner.

We were seated immediately in a spacious booth, and a Mammoet crane dropped off our menus. I ordered the wine, a Jackson Triggs Chardonnay I think (doesn’t matter – a glass of Purell would have done the job just as well), and sure enough, it was filled to the top! Yay! Michael ordered a Coke, and it was served in a glass as tall as our server. It came with a straw. A bendy type. And it broke. It was happily replaced.

It took us 20 minutes to review the menu, and we both decided to start with the miso soup. The broth was nice. The seaweed chewy, and I wish they could do something creative with the tofu instead of having these little cut squares which reminds me in some roundabout way of Solent Green.

Michael eventually decided on the Surfer Nigiri which is an assortment of dead and uncooked fish (don’t get me wrong, I love sushi, especially sashimi, LOVE IT, but only when I’m on the coast and the stuff is so fresh you can have a conversation with your dinner). I selected the beef teriyaki in a panic, which was this: beef in teriyaki sauce, an Amazing Dome of Rice, three slices of cucumber and 25% of a tomato. The beef had chewy bits, but it was cooked nicely, and the flavour was sweet… like eating beef flavoured candy. I had my glass of wine, and that’s all I wanted really.

There is so much potential for ambiance at this place, the pretty girls in their kimono’s, the spaciousness of the restaurant, the relaxing plinky-plinky Japananese music, and the cleanliness – but there a few distractions – the bright lights and the thud thud of rock music from the adjoining bar. But maybe it’s clean, because you can see where dirt might hide, and maybe the rock music is what motivates our waitresses to be so quick with their service.

The following picture is a copy from their on-line menu:  Maki Maki 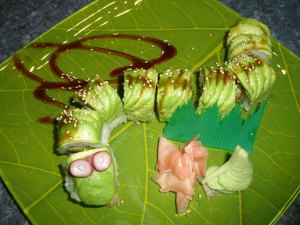