September was declared the Month of Minimalism in Walsh Manor. I was inspired by Twitter’s and Edmonton’s cheerleader, reuse and recycle advocate, self proclaimed kook and social media sweetheart, Super Su. I embarked on a quest to rid our two bedroom abode of all its unloved and unused stuff.

It was sold to me as the #minimalismgameyeg. Game on. This game did not involve running, so I had half a chance to win. The rules were simple. On September 1, find one item to remove. On September 2, find two items to remove, and so on, until September 30 when you chuck out 30 items.

On Day 1, this seemed to be an easily winnable game. Days 2 – 9, it was still a breeze. Double digit days started to get a bit more difficult, but still completely achievable.

What I didn’t realize, until the month of September, is how much stuff we hide in cupboards, closets and drawers. We got rid of 465 items in September. 465 items that found their way to the Reuse Centre, Goodwill, Mrs. B, the recycle and garbage bins out back of our place.

I was surprised by the amount of support I received from the social media community. It was rewarding because several people identified that they were purging stuff from their homes, having been inspired by my posts. I was asked to provide some tips. I will do that now:

Protip #1: Start with one item. Find something, anything. Take it, and chuck it out. I bet you will find a plastic bread tie in your kitchen drawer. Start with that.

Protip #2: Get a box. Fill it with stuff for the Reuse Centre. This includes stuff like CDs, CD cases, yarn, paper, felt things that you put on the bottom of chair legs, and gift bags.

Protip #3: Get another box. Fill it with those shoes, mitts, sunglasses, and scarves hiding in your hall closet. If they are still good, donate them. If you come across a dried pair of leather gloves, chuck them out.

Protip #4: Open That Drawer in your kitchen. You know the one. It has bread ties. Twist ties. Chopsticks. Lemon zesters. Tea strainers. Have you used them in the past year? No? Chuck them.

Protip #5: The Hardware Drawer. For some, this may be combined with the kitchen drawer. In our home, we had a dedicated hardware drawer, and it had treasures in there that were remarkably hard to part with. I plucked out a package of magnetic tape and said, “this might come in handy some day”. The truth is, I have not used magnetic tape ever in my life so far, and it is doubtful I will need magnetic tape in the next 50 years. Chuck. Command strips? Yes, they were exciting when they were first invented. Do we need dozens of them? New and used? No. Chuck. 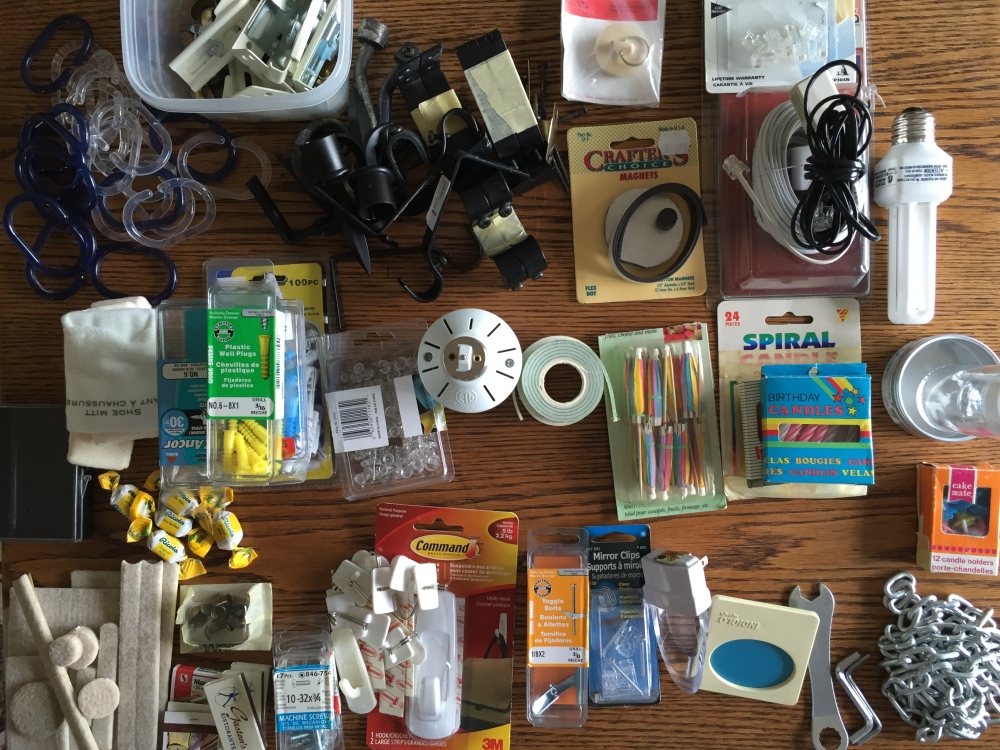 Protip #6: Be prepared for upheaval. Our apartment became (and still is, in part) a mess. I have stuff in one pile for Mrs. B. I have stuff in another box for our local church’s rummage sale. I have curtain rods laid out in the hallway, waiting to be removed.

I have become familiar with the location of clothing recycle bins in the neighbourhood. I am friends with the local Goodwill store. I can recite the acceptable items list for the local Reuse Centre.

I expect within a month I’ll be rid of all the stuff earmarked for its specific destination. I am pleased that our silver flatware will make a collector happy, our woolly scarves someone warm, and our jigsaw puzzles keeping someone busy over the winter months.

Here’s my list of purged items from our home throughout the month of September:

Day 4: Chinese Soup bowls and spoons (originally bought on a whim from a T & T visit).

Day 6: Stuffies (these thing breed on their own).

Day 7: My delicate unmentionables that I would be embarrassed to be caught wearing if I was ever in an accident and taken to hospital.

Day 26: The Kitchen Drawer, which included no less than three corkscrews.

Did I win the game? You bet I did. But then, even those who chucked out one bag old clothes win as well. This is a game where everyone wins.

My goal is to free us of the unused and unloved stuff that collects around us without notice. Although I do get anxious when there is too much stuff around me, there is comfort in a stack of favourite books, a project with potential in the corner, and collection of teas or wine waiting to be consumed.

Find what works for you. Start in a drawer. Toss out that twist tie. It’s a first step.