Have you eaten a Ford lately?

Indeed, that is a serious question. When is the last time you took a bite out of your car? Getting into a fender bender and having  your teeth smash into the steering wheel doesn’t count (and why weren’t you wearing your seat belt? Perhaps you need a new car with airbags?).

The people at Ford are asking us the question. I was lucky enough to attend an event in February at NAIT’s Ernest’s restaurant which was all about showcasing Ford’s commitment to using sustainable products in their vehicles. Things like soybeans, wheat straw, rice hulls, sweet potatoes, coconut and dandelion roots.

What made this particular event exciting for me, was the test of the Ernest’s culinary students to create our supper using ingredients that can be found in Ford vehicles. They did not disappoint us.

As a for instance, the evening started with a Oriental Hot Shooter with Tofu. The soybeans not only make tofu, soybeans are also used to make the seat cushions, backs and headrests in Ford vehicles. One appetizer was a Sweet Potato Puree with Dandelion Honey, along with maple bacon and baby arugula. I learned that dandelions are being tested as a possible alternative to synthetic rubber, and sweet potatoes are used to create the plastic in the door map pocket. I bet you look at your front lawn differently this summer as the dandelions appear! 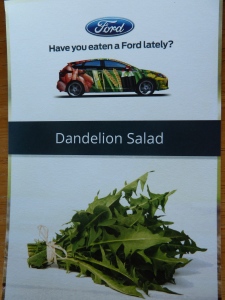 I am very happy that Ford is taking deliberate steps to move forward with environmentally sustainable vehicles (at least pieces of their vehicles), and in particular that they are brave enough to sell their hybrids and electric vehicles here in Alberta, with monstrous pick up trucks on the roads as far as the eye can see.

Ford is even giving an Ecoboost option to its butch F-150. In the same breath, they also say it is the Future of Tough. I’m not judging you, but let me tell you when I’m sitting in my (gas) car next your diesel spewing monster machine, I would probably give you a big smile instead of a frown if you were driving an Ecoboost F-150.

I grew up with a Dad who was mad keen about having a vehicle with “power”. This meant we had the 1974 Ford “Country Squire” Station wagon, with it’s V8 engine, to give us enough vroom to tow our tent trailer and get up the hills in the mountains with nary a drop in speed. That sort of thing sticks in your mind as you get older, and a few years ago was thrilled with my V6 Ford Fusion. I do want power, I also want to make choices that will not only help the environment, but also help me at the gas pump.

When I’m ready for my next car, I’ll definitely kick a few tires on Ford’s hybrids, and maybe even get one out for a test drive.