I don’t know if it’s just me, but Argentina has been poking me in the back trying to get my attention. A friend is touring through there right now. The first leg of the Amazing Race took place in Argentina on last night’s show. The Falkland Islands are in the news… again.  And my grandfather’s brother, Andrew, has been on my mind a lot lately. He’s a man I met twice – both times, in his 90’s, he flew to Edmonton from Buenos Aires on his own. He’s now deceased. I’ve been kicking myself for not getting to know him better. I remember him being kind and of a gentle spirit, but he could only speak Ukrainian and Spanish, and me, only English so communication was mostly a bunch of smiles at each other. Instead of immigrating to Canada like the rest of my family, he chose Argentina. Why Argentina? (Before you answer that, remember he immigrated to Argentina long before I was even thought of).

There is no question, the landscape is gorgeous. For arm-chair travelers such as myself, think of Alberta, but squish it, so it’s long and narrow, add the Atlantic ocean where Saskatchewan is, add some islands where Lloydminster is and tell England they can’t have it, bump up the temperature a few degrees, import some penguins, and you have Argentina. They have cattle. Oil. Mountains. Foothills. Fertile plains. Churches. People. Cars. Social issues. But mostly…. EMPANADAS!! Ole. 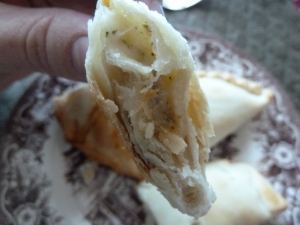 But what do you do when you are craving an empanada and are not in Argentina, or have any plans in the near future to visit Argentina, or anywhere Mexico south?

You go to Tienda Latina, of course!

That little plaza at the corner of Argyll and 99th Street is a one-stop shopping place. First we bought a new mattress, then we did the tango over to Tienda Latina and said hello to Carlos.

I gotta say, nothing is sexier than having a husband who is addressed as “Peligroso” when we walk through the door. Peligroso means “dangerous” in English and my tea drinking, proper pajama wearing Michael being referred to as Peligroso makes me look at him a whole new way. Rar.

Tienda Latina has a vast assortment of frozen empanadas – cheese, chicken, tuna, beef. All you need to do is pop them in a screaming hot oven until brown, or, if you have the means, dunk them in a vat of hot oil and deep fry them. Deep fried would be best, but for those without a deep fat fryer, the oven works very well. The empanadas are labelled as Argentinas empanadas, but are made right here in Alberta.

Argentina may not be crying for me, but it certainly is beckoning. I’ve added “horseback riding expedition through Tierra del Fuego” on my Bucket list. I’ve already crossed off “eat haggis” so anything is possible. 🙂