Our old toaster still toasts, but its uneven browning and tendency to arc electrical bits into the air made me think it was time to replace it.

I’ve been accumulating Air Miles forever… but understand I’m not a crazy collector. When I signed up I had visions of redeeming my points for an around the world trip,  fine hotels, food, wine, chauffeur service, chocolate mints left on my pillow each evening… you know… that sort of thing. And after about 5 years of collecting, I decided I was ready to redeem my miles and go on that trip of a lifetime… so I excitedly sat at my computer, logged in to Air Miles, and had a look at my points balance, and started shopping!

But what’s this? No matter how many times I clicked, I discovered I had only enough points accumulated to go see a movie. A matinee. In Edmonton. Not even popcorn.

So I put Air Miles out of my head. Not worth it I thought. And now, another 5 years later, with a toaster acting like a Tesla plasma ball, I thought, “HEY! An Air Miles Toaster!”.  And sure enough, I had accumulated enough points all these years for a toaster.

But not any toaster. Oh no.

Ladies and gentlemen, I introduce you to… the Dualit Toaster! Ta dah! 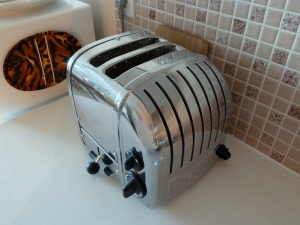 It weighs a ton and occupies our only vacant corner of our kitchen counter. The old toaster could be tucked away in the cupboard. This one demands to stay on the counter top in its shiny reflective glory (see if you can find where I tried to smudge out my reflection – I looked like someone in a house of mirrors tent at the exhibition and wanted to keep this blog PG rated).

I am in love with my oldie worldie toaster. We have to manually plunge the bread down, and when the timer finishes ticking (rather loudly), we have to manually lift the toast out. It’s a step back in time, but I’ll tell you this… it produces the most evenly toasted bread I have ever seen in my life.