Mr. and I went to Vancouver Island this past week, and bombed around in our car rental along the little roads that crisscross over the Saanich Peninsula and beyond.

We visit the island a lot, but not so much in the height in the summer, so it was a real treat to take part of summer festivities. One of them being… fruit!

This BC Tree Fruits logo was predominate, and although advertising fruits grown in the Okanagan, it is usually surrounded by locally grown fruits as well. When I see this logo, I am instantly transported back in time and our camping trips through the Okanagan and stopping at vendors along the highway selling cherries, and the juiciest peaches I’ve ever eaten. 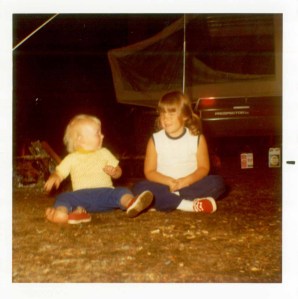 This trip, we came across baskets of these luscious berries, and the teensiest little cantaloupes I’ve ever seen. 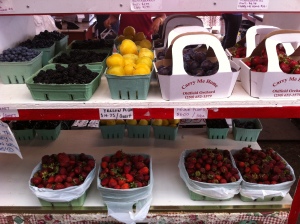 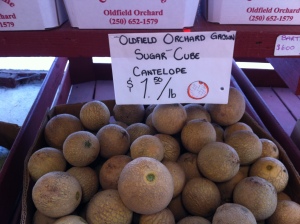 Of course, being the good Ukrainian girl I am, I opted to buy some large-headed garlic on account of its ability to be easily transported home (and it’s already been whirred up into a hummus that had Michael rummaging through all the cupboards for some minty fresh breath cleansing gum for afterwards).

This last trip to Victoria turned into a musical affair. It seemed every corner we turned we were watching live bands. Inside, outside, daytime, nighttime. It was marvelous, and we were particularly charmed by this guy, Tom Watson, from the Honeycrooners. 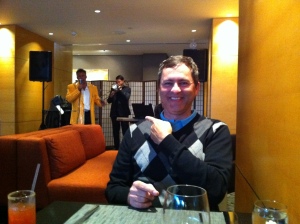 He serenaded us with the music of Dean Martin, Frank Sinatra and others of the Rat Pack at the Laurel Pointe Inn where the food was “meh”, but the entertainment was “wow”. We enjoyed Tom’s show so much (or perhaps it’s because we enjoyed being victims of his between set banter), we saw him in his other incarnation as “Contraband” where he and his gang played live music of the 70’s, 80’s and 90’s at Haro’s Restaurant at the Sidney Pier Hotel. The food at the Sidney Pier Hotel was far better, yet I have to admit I’m having a pre-senior’s moment and have no recollection of what we had! And I call myself a food blogger…..

So that, in a nutshell is our summer vacation. We spent far more time touring, nosing around, and exploring the universe than eating out. Yes! The WHOLE ENTIRE UNIVERSE! We we so lucky, we got to go in an observatory, with real live astronomers and look at the most amazing things in the night sky through an honest to goodness telescope. Look! Here’s an exciting picture of the event:

Cool, huh?!!! And for my computer geek friends, you will be amazed to learn, as I was, that they still use an old 286 computer to turn the telescope.

I’ll leave you with a picture of my most favourite things from the coast…. boats! 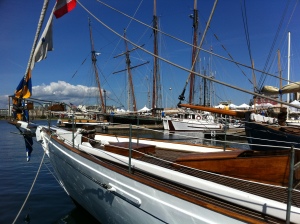 Michael and I were very lucky to be at Victoria’s Inner Harbour at the same time as the Victoria Classic Boat Festival.

So, not much to report in the food world. But wait for it… next week Walshcooks goes to Philadelphia, where I plan to try, for the very first time, IN MY LIFE, a Philadelphia Cheesesteak! In Philadelphia!! Which reminds me that I have to add “antacid” to my packing list.