I don’t mean to sound snobby, but I would have never thought I would have a great dining experience at the Fantasyland Hotel at West Edmonton Mall. Ever since the place was built, I was a bit cynical about a place where you can sleep in a fake igloo. I figured, somehow, that a dining experience would be superficial stuff that would just marginally satisfy tourists.

I was pleasantly surprised.

Michael and I were given gift certificates to the L2 Grill. Until that moment, we had no idea the place existed. Mind you, they don’t advertise during Saturday morning football matches on Setanta, or on the side of buses, so there’s no surprise there.

I was still dubious, especially as I fought traffic on the second level parkade at West Edmonton Mall. And as we entered the mall, we were stared at by some hard-core gamblers out for a smoke, horking up phlegm, and being loud and rowdy.  In a way, it was just like home, as these guys reminded us of our problem neighbours…

So we enter West Edmonton Mall, and there on the left is the L2 Grill. Recently renovated, it looked clean, new, cared for, and well arranged. I was impressed.

We were greeted promptly and shown our table. We were the only diners there. This was at the stroke of 6 o’clock. By 6:15 p.m. there was a steady stream of patrons, and the place filled quickly. I was relieved.

Our server, Wallace. Let me tell you about Wallace. Attentive? Oh yes. Over attentive? Very much so. Annoying like a Keg server? Not at all. Wallace wasn’t a “kneel beside you, let’s be best friends for the next 90 minutes, and if I charm you to death you will tip me well” sort of waiter. No. Wallace is one of those rare treats that I keep looking for and writing about.

He’s an old-world type of waiter. He keeps an eye on your table because he cares. He makes sure your wine glass never reaches the bottom quarter; cutlery and linens are quickly replaced between courses; when your husband spills his water all over his pants, Wallace claims it’s his fault, not Michael’s (even though he was standing 2 metres away). He asks where we are from, what we are celebrating, and why we chose L2. We answered all honestly: We are from Edmonton, we are celebrating no particular thing, just life being good to us, and we chose L2 because we got gift certificates and otherwise would have never come here, as we never heard of it before.

Wallace decanted our wine, served us a beautiful basket of fresh breads along with butter, tahini, and a red pepper pesto. 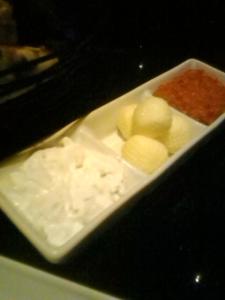 I have to stop here and tell you of our experience at the Keg a few weeks before this. We were served our bread, and it was quite dry. We told this to our server, and when she brought our refreshed basket back, she declared, “This should be good, I opened a fresh bag”…..

After the bread, we were served a little piece of cheese, wilted basil and a quarter sized piece of melted parmigiana on a spoon. This was gratis, and quite a nice surprise.

We mulled over the menu (which I would have posted here for you, but they have THE WORST website ever, and today I can’t find a link to the menu, which is awful because I rely heavily on on-line menus when writing this stuff as I have a poor memory for details… ) and decided on sampling the appetizer menu and sharing an entree.

Our first appetizer was Kobe meat balls. Three quarter sized meatballs served in a screaming hot cast iron pan. It was served with hot pepper, and was out of this world delicious. Mind you, when there are only three tiny meatballs to share between the two of us, each one becomes more valuable, and thus also becomes the best tasting thing ever and we have to struggle remain “grown up” while we sort out who gets the last one.

Second appetizer was duck confit. Oh. My. God. Everyone who eats duck says, “You have to try duck confit”. Now I see why. It’s savoury, melt in your mouth deliciousness. It was served with a fried quail egg, pictured below. As you can see, I was so enamored with the duck, I forgot to take a picture of it.

Our third appetizer was a shrimp cocktail. Now, if you are like Michael and I, you are probably conjuring up images of a pretty glass, with shrimp hanging over the lip, some ice, and cocktail sauce. My friends, L2 serves (enter Monster truck screaming announcer, heavy acid rock music, and visualize the screen shaking) MONSTER SHRIMP COCKTAIL. I’ve never seen anything like it. Being a prairie girl, I’ve lived an innocent life thinking shrimp were small. These were huge. Massive things. So big, I had to pull my feet up off the floor, push my chair away from the table, and make myself as small as possible to avoid being consumed by my own dinner. It was horrific.

But tasty. Oh so tasty. It was a gigantic shrimp, that tasted, just like shrimp! Imagine! It was served with a regular cocktail sauce, but also a type of mayonnaise, which was equally good.

For our main course, we opted for a steak, and asked to have it split between us. Well, our only complaint was they didn’t split the order in the kitchen, but instead, served me the entire thing, and gave Michael an empty plate. I felt like a mother feeding a child, as I had to cut it up and pass it over to Michael. Here you can see my decorating skills, or lack thereof:

For dessert, we went old world and asked for crepes suzette. Again, a lost art dessert, and we were so happy to see it still being done at L2. The crepes were delicious, but more delicious was the entertainment and buzz it offered the entire dining room.

At the end of the evening, Wallace, who definitely charmed us, presented us with a pretty box of chocolates to take home. Each chocolate was wrapped with images from the hotel, including the igloo room.

Epilogue: When I told my Mom about our visit to L2, she exclaimed, “Oh, that sounds so French”. I looked at her and blinked a few times, and then figured out that she heard, “Elle Tu”.

Promise: For my photography friends, I apologise once again for poor quality cell phone pictures. I have a great camera sitting at home, and I’m even on a wait-list for proper photography classes. There is hope for improvement.