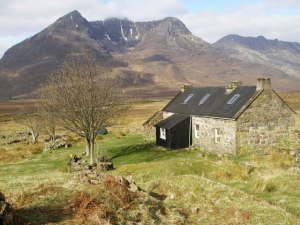 The Bothy. A wine and whisky bar found at 5482 Calgary Trail. It looks nothing like this picture of a bothy that I nabbed from the net, but it emotes the same feel. It’s a magical place. It’s cozy and comfortable, the staff are so amazing that this blog is primarily about them, and the food is so yummy that I am on the verge of tossing out all my cooking equipment and dining exclusively at the mercy of Kevin, the Chef.

Where to begin? Doug Townshend is the owner of the Bothy. Michael and he have done some business together, and Doug has been keeping Michael abreast of the progress of the place since almost its inception. Since it opened, he has asked Michael several times to stop by, and finally on Christmas Eve we decided to give it a go.

We arrived, and were the only customers in the place, which always make me a bit nervous, but that vanished the minute I recognized Andrew. Who is this Andrew you ask? Well, Michael and I just had a lengthy discussion about Andrew and his title, and have decided he is difficult to describe. But the best we can do is bartender, sommelier, whisky expert, and bon vivant.  I couldn’t believe my eyes. Andrew is by far the most delightful of Scotsmen and I’ve been wooed by his charm and knowledge of wines and spirits before when he worked at a wine shop in the depths of the south side. I had been recently disappointed on my bi-annual pilgrimage to said wine store to stock up spirits to find out he had left. But, in the vein of a classic Christmas film, here he was!!! Christmas was saved!

Now the food. The first thing that caught our attention was the plating of equisite looking beef. When we inquired what it was to order it for our dinner, we were given some fancy-schmancy name, but in the end was told it was “left overs” and that it was Andrew’s dinner. Right then, we figured if their left overs look that fab, what would their fresh stuff be like? I’ll get to the point, it was delicious. What makes anything yummy, other than the skill of the chef and the quality of the food, is knowledge. I’d eat eye of newt if there was a story and a delicious sauce behind it.  Kevin offers great skill and knowledge, but also a passion for keeping things simple and good. He’s not at all pretentious and we enjoyed spending time chatting with him.

Michael had a tomato and bacon soup which I could easily eat every day until my last breath. He then had a steak and mushroom pie (made by Angie whom we didn’t get to meet) which was incredible. I was so indecisive this evening that I asked that Kevin chose my two picks from the cheese and charcuterie menu. Kevin put together ham and cheese plate for me. It contained a lovely baguette, one year aged smoke house cheddar and black forest pork loin, along with a noteworthy basil pesto, mustard and red current jam. I made sure a spec wasn’t left on the plate. Michael and I shared a chicken and leek pie which was mouth watering as anything we tried.

I was content with my champagne, and Michael decided to have a whisky after dinner. This is where Andrew came back into the picture. Andrew, like Kevin, was called upon to help. Andrew asked for a baseline, and Michael declared the last time he had a whisky it was a Blackbush by Bushmills. Starting point established, Andrew suggested he try the Auchentoshan 3 wood (whisky, not a golf club). He then went on to describe the type of sheep that wander through the lowlands, the weather the day the whisky was bottled, etc. Okay, not quite, but near enough. We all had a good laugh when Andrew described the Auchentoshan as having flavour notes of pancake and syrup. Michael replied, “Oh, like a breakfast whisky” to which Andrew replied in his best Ray McCooney of Little Britian fame “Yeeeeeeeeeees!”. Unlike Ray McCooney, Andrew doesn’t need to resort to riddles, spells and a flute to entertain. He’s unique in his own right, and the Bothy is very lucky to have him.

By this time in the evening, the place filled up, plates of haggis were flying out of the kitchen, large glasses of merlot being poured. Everyone was in a festive and social mood. Doug, displaying he has the makings of a great inn keeper, asked Michael and I to join his table. We even spent some time in the kitchen learning about the magic of induction stove stops and immersion cooking.

As we left the Bothy that night, it was like leaving long-time friends. We said goodnight to virtually every person in the place, wished one and all a Merry Christmas, and left knowing we would be back in good time.