Michael and I attended the What the Truck event last night, and it wasn’t until now, over 24 hours later, that I could write anything, because…

Now that time has past and the food digested, I am happy to share our experience.

Last night’s event started at 5:00 p.m. We arrived at an eager 4:40 pm hoping to be ahead of the crowds. The What the Truck events have gained much popularity since the first one I attended back in June 2011. The lines we observed when What the Truck took place on the Victoria Promenade back in August, although a perfect summers night, made me feel a bit agoraphobic, so we ended up not hanging around. I’m not the sort of person who gets a thrill standing in line with others in the way between me and my beef brisket sandwich! I see that many people love it though – and I confess, it is a nice time to chat with other friendly foodie people, see what everyone’s eating, and to observe which truck draws the largest crowd.

Of course, at this point, I can’t help but reflect on a time when Churchill Square was nothing more than a patch of grass and bunch of trees. I was one of those people who protested the change to a “concrete compound” as I liked to call it then. Well, I eat crow. It turned out just awesome, and I’m sure in time that is exactly how I’ll feel about the municipal airport and the arena too!  🙂

Michael and I planned our itinerary in advance, but because we were early and the vendors weren’t open yet, we took some time to stroll from truck to truck, and review the menus. There were a few minor changes from what was published on the website, but the changes were not anything that disappointed.

Our first stop, which we evaluated at the end of our evening to be our #1 favourite of the night was at Little Village Food Truck.  We had the slow roasted lamb and potatoes.

The lamb was tender, the potatoes cooked perfectly with rosemary and lemon. It was beyond decadent and Michael and I were Mmmm Mmmm Mmmming through the whole experience, with each of us wondering how we could divert the others attention, so we could eat one extra potato, or get an extra forkful lamb. 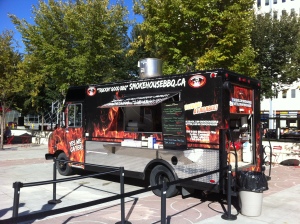 Second stop was at Smokehouse BBQ.  Here they offered a beef brisket sandwich, which was one of the last minute additions to the menu for the evening.  The beef was delicious, and I enjoyed the rich meatiness served along with the tart coleslaw.

This happened to be our #2 favourite of the evening – losing a point only because the bun was cold. Had that bun been warmed, it would have tied for 1st. Smokehouse BBQ also gets a special commendation for offering, not just a little itty bitty moist towelette like Mom had at the bottom of her purse when we were kids (and which were usually dry when the foil wrap was finally opened), but these guys offer a full 8 x 10″ towelette perfect for wiping off drippy BBQ sauce, mayo and other sandwich squidge. 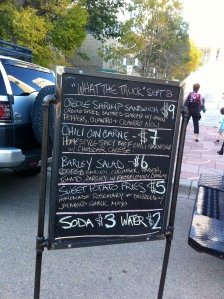 Our third stop took us to the north side of Churchill Square to The Act where we shared an order of the home cut sweet potato fries with rosemary and jalapeno garlic mayo.

I found these very difficult to share. They were delicious on so many levels. Crispy. Flavourful. It wasn’t drowning in mayo, but it was just enough of a drizzle to tease you and make you rummage through to the bottom of the dish to see if an extra blob happened to find its way there. 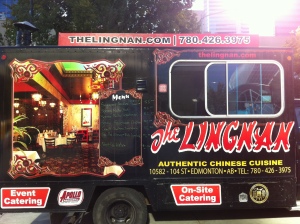 Stop number four was a complete impulse. We passed the Lingnan, and I asked Michael if he ever tried the crack chicken (hot and dry chicken). He had not, so it had to be ordered. 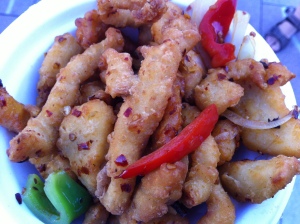 I knew what I was in for, but it was fun to watch Michael take his first few bites, and not have much of a reaction. A few minutes later there were the satisfying yelps and mouth fanning as the spicy heat hit the spot.

At this point we started to waddle, but we were determined to order something sweet for dessert. We selected Molly’s Eats for the lemon white chocolate cookies.

Although they were good, they tasted more like a dense, slightly dry cake than cookie. That said, they delivered in their promise of something sweet and lemony.

We ran into Mack Male in the crowd and stopped to chat for a minute. Although he is pleased with the success of the What the Truck events, you can see that this man is a visionary and is always planning for improvements.  Mack has a selfless business sense that is admirable and refreshing.

For the last What the Truck event for the summer, it was a well attended, well organized event. The weather was perfect, the crowd happy, the trucks turning out the food and pleasing their hungry customers.

We look forward to the next event. Thanks to everyone that helped make it a successful evening. It was worth every minute of your time.