Michael and I were invited by a member of the Edmonton Bailliage of the Chaîne des Rôtisseurs to a formal supper.

The modern day Chaîne (pronounced something like “shane” for those of us who don’t speak French), formed in the 1950’s. They based their traditions and practices on those of the old French guild of roasters, whose written history dates to 1248. 1248!

The Edmonton group, or Bailliage (sounds like bill-awge), meets throughout the year, for   formal suppers, and more relaxed picnics. For each event, one member is titled the Chevalier host, the other the Professional host. Their responsibility is to plan and prepare a meal for their guests. Sound intimidating? Well, it wouldn’t be, as in this case, when your Professional host happens to be the Program Head at NAIT’s School of Hospitality and you have class-act culinary students available to provide support.

The true fun of both positions, I believe, would to be part of the “testing” phase of the dinner plan. This is where the menu is developed, tested, tasted and paired with the evening’s wine. Imagine! Throughout our supper, we were told stories of the development of the menu, and the different wines that were sampled to find the perfect pairing. In one case, they couldn’t make up their mind which wine would be best served with the entree, so they threw caution to the wind, and served us three! (silent yipee!) But I get ahead of myself.

Along with our invitation was the warning that this event is a black tie affair. I had to sit and think about that for about five minutes before responding. As you may have gathered from previous posts, Michael and I are not black tie sort of people. Ever. My husband especially, usually frowns at thought of trousers and shoes at the best of times, and wears his shorts and sandals as long as the weather allows him too. However, I risked asking if he would mind wearing a tux for one night out of his life, and he surprised me by agreeing. Armed with this, I RVSP’d to the positive.

Shortly thereafter I had a small anxiety attack. I gave up serious self-confidence issues many years ago, but suddenly, I didn’t feel like I could hold up in a group such as this. I am known to sit on the couch and eat Nutella out of the jar. I like McDonald’s for breakfast. I usually drink too much and laugh too loud. What do I know about food? Wine? In the grand scheme of things, I know nothing. But I know enough… I know what I like. I know what I don’t like. And I know I will try anything once. Confidence restored, planning began.

Planning was required for our evening’s attire, and our transportation. I was most impressed by the invitation’s statement on drinking and driving: “The executive recommends that when attending the events, members and guests pool the use of a taxi,
or have a designated drivers so that the evening can be enjoyed without the
risk of violating the drinking and driving laws of Canada”. Clothing purchased. Driver found. We were ready.

To be honest, it was intimidating the first few minutes when we arrived as everyone was dressed in their finery, with many of the guests wearing a ribbon with chain (chaîne, get it?) around their neck. The awkwardness didn’t last long. It was quickly remedied by the sparkly pink bubbles that were served liberally by attentive staff. Along with the bubbles, came and assortment of horses ovaries, as Michael calls them, or hors d’oeuvres, as the rest of the world does. We stood and mingled, the centre of attention an ice sculpture of a praying mantis. I tried, unsuccessfully, to act like I held a glass of wine, purse, napkin and hors d’oeurves every day of my life, while standing in heels in a dress that was quickly dropping its silvery bits all over the dining room. I apologise to the cleaning staff, as I know I left a trail wherever I went.

Plied with some bubbly courage, I went to the kitchen to see if I could take pictures, and was refused, understandably, because of the busy-ness of the place (I chose to ask when they began plating), and also to protect student privacy. But a compromise was struck. My camera was given to Chef, and he took photos of each course as it was plated. MARVELOUS! All capitals. Couldn’t have worked out better.

So without further adieu, the moment we all have been waiting for, I present to you our menu of the Chaîne des Rôtisseurs, as made at Ernest’s Dining Room. Each course was introduced by a NAIT student, a great way to give them public speaking experience. They all did a terrific job.

First up, we have smoked Alberta halibut cheeks, onion marmalade and pickled beets, with fish skin tuile. Of course the joke of the evening was which lake in Alberta did they find the halibut? Ha ha.

Next was the Consommé Royale. The royale part are the diamond shaped pieces in the centre of the plate. It was a custard of sorts, and quite delicious. The consommé was a labour of love, it’s delicious flavour cobbled together over time and with lots of TLC. I was in love. My only experience with consommé before this night was from a famous red and white labeled soup can. I can see my dinner companions fanning themselves with the shock. 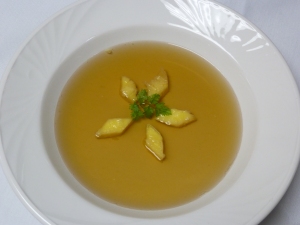 Ah yes, next was an intermission of sorts. We were served a green apple and Alberta Springs Whiskey sorbet… in an edible box! 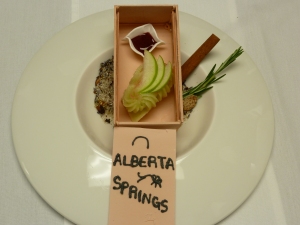 So much fun! We all ooh’d and aah’d enough that we were told we could take our boxes home. Michael and I both ate the delicious contents, but what impressed me the most is the scent and flavour of the sugar the box sat in. It was so deliciously aromatic of cloves, cinnamon and rosemary, that I scooped the sugar up into the box, and have it sitting beside me here at the computer. Our computer room has a delicious spicy smell about it, and is a lovely memento of the evening. And, should I need a sugar fix, I can break the box to bits and nibble on it.

The main course was a trio of Alberta game and looked like this:

You are looking at grilled boar chop, braised bison short rib, pan seared elk and sundried cherry sausage, along with taber corn spoon bread, ratatouille, in natural jus. The bison short rib was so tender, it almost completely disappeared from the plate. The taste was amazing, and nothing like I’ve ever had before. Overall, consensus seemed to be in favour of the elk sausage. I concur, but my heart was awarded to the 2007 Two Hands Zippy’s Block, a Shiraz from Australia.

The salad (served after the main, new to me, but then, I don’t get out much), was this lovely plate of greens:

Above is the lovely named Lolla Rossa, Mizuna and Frisee, along with black garlic chips and lemon verbena emulsion. With a name like that, even the most ardent salad haters couldn’t help themselves and eat every last leafie goodness.

Now to dessert! In general, I’m not such a dessert fan, but that could be because a lot of places I go get desserts made elsewhere, frozen, and shipped to their restaurants. But not at Ernest’s. The dessert was as pretty to look at as it was to eat. Observe:

The last course, the cheese plate, was a perfect end. Especially when served with a lovely glass of port. The port, a 1985 Smith Woodhouse Vintage Port, was a real treat.

What made this cheese plate so interesting was the grapes. They were roasted! And delicious I might add, once you got past the strange sensation of holding a nearly hot grape.

The company was eclectic, fun, and interesting. On my left I had a distinguished gentleman with a monocle who owns a vintage racing yacht, and on my right I had an executive chef at a big conference centre in Edmonton built on the side of hill, who hails from Toulouse France. And yes! He played rubgy too! This of course was good news to Michael and I as we are Big Fans of the sport.

All our dinner companions were delightful, clever, and easy to talk to. My concerns of it being stuffy and pretentious were completely unfounded. I would go again in a heartbeat. If invited, that is. Hint. Hint.

The evening wound up with the kitchen and wait staff lining up for recognition for a job well done. It was well deserved. The food was perfect, and the service seamless.

All said and done though, I am most grateful to my host for the invitation, and Chef for taking my pictures. Without that, I wouldn’t have this. Thank you Tracey. Thank you T.J. for taking such great photos.