Tonight, inspired by a Tweet from Jamie Oliver and having a bag full of ripe garden tomatoes provided by our landlord, decided to take a swing at making homemade tomato soup.

Not quite sure how to begin, I started with the basics as offered by Jamie Oliver’s recipe of sauteing onion, carrots and garlic.

Of course I didn’t use any sort of garlic. I used the massive and absolutely ridiculously delicious garlic available at the Old Strathcona Farmer’s Market. $8.00 for two heads garlic. At those prices, I suspect the garlic alone keeps the Hutterites in headscarves and hats for a year. 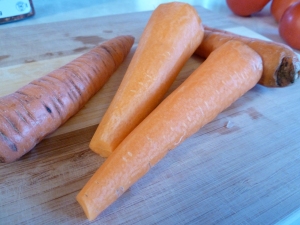 If you read yesterday’s post, you know I have a cold. In my effort to cure my cold, I bought some ginger yesterday, and the root was so pretty I bought the entire thing, which means, I have 1 kg of ginger to work though. Carrots and ginger go well together, so I thought I’d give it a try in my tomato soup.

On the stove, I had gently cooking: onion, carrots, garlic and ginger. Whilst that was doing its magic, I boiled up some water and added about 7 assorted sizes of tomatoes. I had them burble away for about three minutes, and plopped the little beauties in a bath of ice cold water. 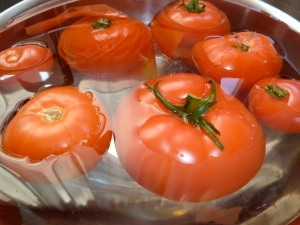 It didn’t take long for them to rip out of their skins like the incredible hulk. So easy to peel and deseed.

I did a rough chop of the tomato flesh, and added to the onionscarrotsgarlicginger mix on the stove. I added a bit of coriander, salt, pepper, and a dash of sugar, because somewhere in the back of my mind I can hear some TV celebrity chanting that tomatoes love sugar and you are always to add a bit of sugar to any tomato dish. I’ve done it forever because of this. Once blended together, I plop-plop-splashed-plopped the mix into the blender and gave it a good whir. And another whir for good measure, and one more just for fun.

Stuck this back on the stove, added a few cups of chicken stock and let it burble away.

Those are chili peppers you see on top.

I had a cursory look at the kitchen counter tops to see what sort of bread I had available to accompany this, and to my horror, only had a loaf of Safeway White Sandwich bread. No way on God’s green earth was I going through the effort of making homemade soup and serve this bread (which is good, don’t get me wrong, but this is HOMEMADE SOUP). I called Tree Stone to see what they had left on their shelf, was assured they had some whites left, and because I had 10 minutes before they closed, put the soup on Min and trotted down the alley to the bakery.

Since Yvan has taken over Tree Stone, I haven’t been best pleased with their baguette. Nancy had the recipe nailed, and the few I purchased since she left were crumbly and like Styrofoam. But forever the optimist, I thought tonight, that I would give it one more try. As a back up, I also purchased a loaf of their sourdough, just in case.

Well, hubby comes home, we dish up the soup, slice the baguette, sit down in front of Coronation Street. Now remember, I have a cold have lost all sense of smell and taste, and one probably shouldn’t be messing around with potent things like ginger when cooking, because Michael’s first response was something to the effect of “hm, ginger soup”. I gave him a look and he proceeded to eat the soup with lots of “yum yums” and “this is great”.

Okay, so the soup might have been a bit too gingery, but honestly, I have 1 kg to get through somehow. Thing is, and in all honesty, we both found it delicious. It kind of grew on us, and Michael declared it is a perfect warmer-upper type of soup for a cold day (or for those suffering from a cold).

The bread! Now I can’t forget the bread. After all my criticism, I happy to say a few alleluia’s and hail Mary’s because Tree Stone has revised their baguette recipe and now provided what I declare to be The Perfect Baguette. Crispy exterior, chewy interior. It was a perfect accompaniment to the soup.