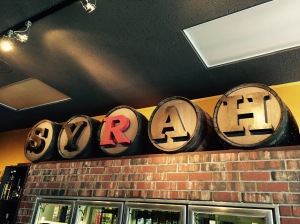 We selected Syrahs of Jasper because the sign outside told us it was their first year anniversary it promised dinner for two for $59. It got us in the door.

For a place named after a grape variety, I was disappointed by the wine selection. I did pick a Syrah, and although fine, I found it lost something in the cheap glass it was served in. You know the sort. The kind of wine glasses you buy at the dollar store and are so thick you could drop it from 10 stories and it would just bounce.

Things got much better with the bread served at the start of the meal. It was fresh, aromatic, warm, soft and was the perfect vessel to deliver the garlic butter.

Our appetizers had us in rapture. Michael had a delicious caramelized onion tart, and I had the elk carpaccio. Things were looking good.

Then our mains arrived. I had the very rich Sturgeon filet. It must have been the fattest fish in the school, and I hope my poor fella wasn’t picked on. I’ve never had such a fatty fish before. It was good and I definitely had enough Omega 3’s for the next six months.

Michael had the Smoked Venison Ragout, and it was a total miss. It wasn’t bad enough to send back to the kitchen, but what destroyed the dish was the strangest textured gnocchi we have ever tasted. It was pasty. It stuck to the roof of your mouth. We looked like a cat who was just given a blob of hairball medicine.

For dessert, I had a too rich double chocolate brownie. As it arrived, I said, “this is much too much…. I’ll just eat this corner”…. and 30 seconds later I’m looking at an empty plate wondering WTF just happened. Michael had the sweet pear tart, which was fair to middling.

Would we go again? Might do, because of the stellar bread and appetizers. But that gnocchi? Wouldn’t want to experience that again.

(Michael just proofed this for me and said, “You should write something about the staff, because the staff were good”. And they were. Friendly, helpful, and our waitress particularly delightful.)